Teach Kids to Control Anger – Not Vent it

The child who is getting frustrated with a puzzle or arguing with a friend needs to learn how to deal with the energy building inside before exploding. Children can slow things down inside their hearts before the eruption, and you as the parent can teach them to do so. An anger management plan needs several components and one essential step is to teach kids to stop when their emotion is telling them to push forward.

Anger can motivate children as well as adults to act out and say or do things that they regret afterwards. Many children, however, have more emotion than they’re able to manage easily. That’s why they need an essential heart quality that God calls self-control. Proverbs 29:11 says, “A fool gives full vent to his anger, but a wise man keeps himself under control.”

Before you move on, be sure to read that verse again. After all, there is a lot of contemporary thinking out there that encourages people to vent or release their anger in order to regain emotional control. That’s not what the Bible teaches. See 10 Truths about a child’s anger parents must understand. Rather, the solution is to develop a heart management plan that embraces godly qualities. Please don’t think this means repressing anger or stuffing it down so that it comes out later with a vengeance. Self-control simply means to manage the energy that anger provides in a way that isn’t counterproductive. Kids can learn to do this but it takes training and a lot of God’s grace. To help your family develop more anger control it’s best to use a Stop technique to slow things down instead of allowing them to escalate.

The size of the Stop for a child depends on the intensity of the anger. Children who are very upset need a larger Stop to handle the challenge, but children must learn to handle the small frustrations of life as well. The Stop is a pause in order to gain control of oneself. Sometimes the Stop means engaging in another activity or leaving the situation. Other times it just means pausing for a moment and taking a deep breath. The child needs to take time to acknowledge the fact that frustration is developing and that anger is present.

With younger children you might even use three different size Stop Signs to illustrate your point. The small one is simply taking a few deep breaths. The medium one may also include walking around a bit to allow the emotion to settle. The largest one is a definite Break from the situation that’s totally focused on settling down, usually sitting in another room or away from the situation.

Watch this one hour teaching on how to use a heart-based approach to help children deal with anger (recorded for homeschoolers but applicable for all.)

Slow Down the Process

Stopping is helpful whether the child is just becoming frustrated, or is already quite angry. This step is especially important for the child who is enraged. Rage is anger that controls you no matter how well you conceal it. The primary way to tell that children are enraged is that they can no longer think rationally and their anger is now controlling them. They’ve lost control.

The solution to rage is always to stop. When a child is enraged you might say, “You’re too angry to talk about it right now. Go spend some time alone. Come back when you can tell me in a calm voice why you’re angry and we’ll continue to talk about it.”

Here’s the challenge. Children who have an anger problem don’t want to stop. They want to push forward, showing their displeasure, determined to get what they want, and sometimes even manipulative with their anger to control the situation. Stopping doesn’t seem natural and kids who lack self-control easily enter anger episodes of various magnitudes.

Don’t Get Sucked In

Whatever you do, don’t jump into the battle with your kids. When they’re angry, children look for ways to draw you into a fight. Avoid it, engaging with a child who is angry is rarely wise. It’s not productive and often escalates the problem. Rather, learn how to stop, and teach your kids to do the same. By slowing down the process you’ll gain a greater ability to interact with your kids without the complications that anger brings. If you choose to fight it out with emotional intensity then the problem is no longer a heart problem in the child. It’s now a conflict management problem between two upset people.

A good anger management plan will, over time, decrease three things: the intensity of the emotion a child experiences, the frequency of anger episodes, and the length of the recovery time after a child has become angry. When parents and kids work on an anger plan, then children develop more self-control. Here are several guidelines for anger management in a home. Remember, don’t try to reason with an angry child, but once the emotion has settle, take time for teaching about anger and ways it can be dangerous. Commit to working together to develop new routines of anger management. Make the following ideas a regular part of your routine and you’ll see significant progress.

1. Never argue with children who are angry. Have them take a Break and continue the conversation later.

2. Identify the anger cues that reveal your child is about to lose control. Point them out early and stop the interaction. Don’t wait for explosions before you intervene.

3. Help children recognize anger in its various disguises like a bad attitude, grumbling, glaring, or a harsh tone of voice.

4. Debrief after the child has settled down. Talk about how to handle the situation differently next time. Even practice a better response.

5. Teach children constructive responses. They could get help, talk about it, or walk away. These kinds of suggestions help children have a plan for what they should do, not just what they shouldn’t do.

6. When angry words or actions hurt others, individuals should apologize and seek forgiveness.

By doing these things you’ll teach your children to do what Colossians 3:18 says, “But now you must rid yourselves of all such things as these: anger, rage, malice, slander, and filthy language from your lips.” It takes work to develop emotional control and the family is often the laboratory for that growth to take place.

Whose Problem is This Anyway? 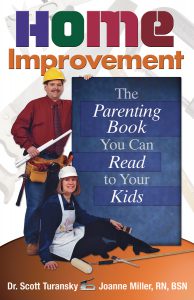 Remember that the child’s anger is the child’s problem. Don’t get involved in dialogue until the intensity decreases. Anger control is an important skill for children to learn and there’s no better time than now. Implementing a formal Stop in response to heated emotion helps children regain control and keeps the problem focused on the child.

Developing an Anger Management Plan will help you teach important skills to your child. The idea of a Stop is the second step in a plan outlined in Chapter 5 of the Home Improvement book. This book has been a family favorite in many homes for years, and has just been released as an audiobook. Click Here to Learn More.

Many adults don’t know how to deal with their increased intensity and push forward instead of backing off. The natural inclination when angry is to become more intense, but the best solution is to lower the intensity before moving forward. Parents who require this kind of process will go much further to help their children deal with anger.

The book Good and Angry: Exchanging Frustration for Character in You and Your Kids gives specific detailed plans for addressing common problems in children. They don’t follow instructions, have a bad attitude, are annoying, they argue,… just to name a few. When parents have a plan they don’t need to rely on anger to solve problems. Furthermore, children who are doing the wrong thing need a plan for change. This book gives you the practical guidance you’ll need to bring about that change.